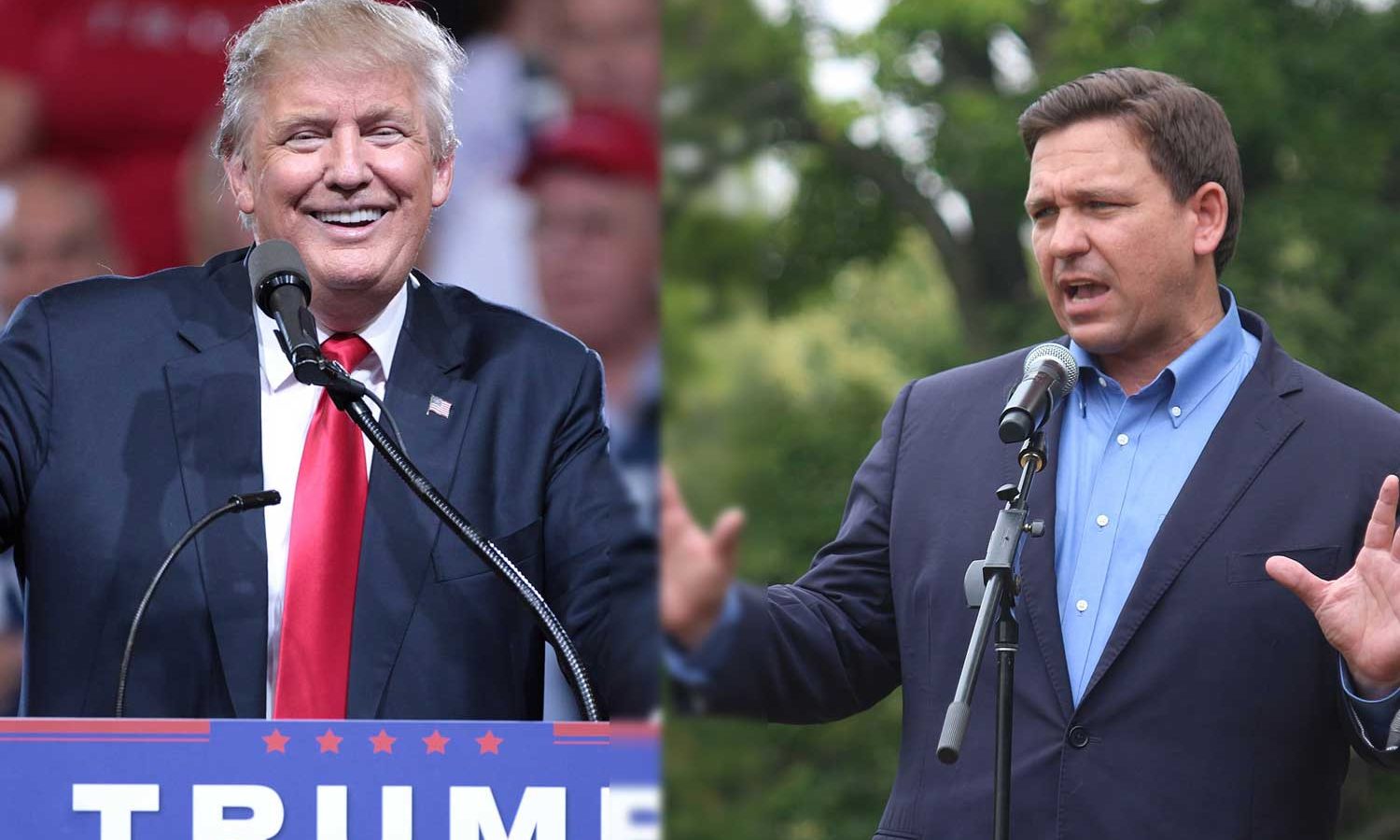 As we approach 2024, the Trump vs DeSantis battle is raging in the GOP. It’s a roller coaster ride that has resulted in utter chaos and a red wave that never materialized. We are all watching Donald Trump hoovering to get his party back, the party that he never really fit into in the first place. All eyes are on this spectacle, but many Libertarians are worrying more about how Democrats will capitalize from all this madness, instead of embracing the opportunity it presents. The war that’s brewing for control of the GOP could help Libertarians! Here’s why.

Remember folks, we aren’t Republicans, we’re Libertarians! We have a far more significant impact on elections than people tend to think. Take the run-off election in Georgia for example. The Republicans nominated a terrible candidate, and Libertarian Chase Oliver presented a message that dissatisfied Georgians could cast their vote for. The fact that he did so well in the current political atmosphere suggests something important —that voters are looking for something else!

Libertarians have been completely preoccupied with our internal fighting, and the ones who aren’t, are more concerned about how the GOP’s issues will help Democrats in 2024. Instead, we should focus on how this could help Libertarians. Most Libertarians who were unhappy with the Reno Rest stormed off and left the party. They should reconsider why the takeover happened and learn from it. Organization and strategy work. Even if you disagree with the results of the Mises Caucus takeover, there’s no denying that they effectively organized and used a smart strategy.

Right now, the Libertarian Party should be strategizing about how to grow the party, instead of continuing the ceaseless gatekeeping that’s been going on within the party for decades. This is an advantageous time to recruit more people and candidates into the LP. But, nobody is going to trade the GOP circus for the Libertarian dumpster fire.

If the Libertarian Party ever wants to achieve significant growth, we have to be prepared to scale our party with a plan to incorporate, educate, and grow it without it being absorbed by the influx of new Libertarians who don’t truly understand libertarianism.

The “Dump Trump” Club is Winning

If you’ve been paying attention, the “Dump Trump” club is winning. In Michigan, the blue wave has flipped the state that once supported Trump. Republicans and Libertarians there are undoubtedly concerned about this trend continuing. The fact that Democrats performed so well during a time when our economy is at its worst, and makes it clear that the country has had enough of Donald Trump.

Simon Rosenberg, the founder of the liberal think tank NDN, discussed the reasons why Democrats performed so well in the 2022 midterms. “It’s very encouraging as we go into 2024,
he said. “Because we were able to stare them down and beat them … [even] with inflation being so high. And it wasn’t just their bad candidates – it’s far more than that.”

He shared some key takeaways on why the Democratic party is strong right now, and he believes it’s largely because of two factors – Never-Trumpers and abortion. This presents a huge problem for Republicans and a big opportunity for Libertarians.

Libertarians missed our moment during Covid

Libertarians are getting louder in their beliefs that government-mandated lockdowns, masks, and vaccines aren’t the answers. Angela Mcardle was right when she said we whiffed the ball during Covid. I am a mask-wearing, vaccinated Libertarian, who finds anti-vax messaging a concern, but I also can spot a missed opportunity when I see one.

Government lockdowns, mask mandates, and vaccine mandates aren’t libertarian, and most Libertarians recognize that they created more problems than they solved. We should have been educating voters on better, libertarian solutions that didn’t involve government force or destroy our economy.

Instead of using the situation to discuss libertarian ideas, we fought among ourselves and allowed Covid to divide the party. Our principles were overshadowed by the Covid-induced division as we argued over whether or not to wear masks, vaccinate, and socially distance. You don’t have to blindly follow science without questioning it, but you can support vaccine choice which demonstrates libertarian principles and independent thinking!

Trump is Not Going to Join the Libertarian Party, but his people are…

The Libertarian party has seen a recent influx of “Trump Libertarians”. These Trump supporters have turned to the LP after feeling frustrated with the mishandling of the Covid pandemic and the growing disunity among Republicans. In New Mexico, our Libertarian Governor candidate was a frustrated Trump supporter who left the GOP and brought her Trump energy into our party.

This influx of Trump supporters has led many in the Libertarian Party to fear that Trump will try to run as our Libertarian candidate if he can’t win the Republican primary. Donald Trump is not a Libertarian, and I do not think he would want to align himself with the Libertarian Party. I think a more likely scenario is that he will start his own third party.

All of this division in the GOP could be great for the Libertarian Party, and we should be prepared for it. If and when Desantis outperforms Trump, Trump’s base will have some tough decisions to make – continue supporting establishment Republicans that go along to get along or follow Trump over to a new party.

Trump Could Provide a Major Boost to the Libertarian Party

The red wave that wasn’t should be an indication of how Trump will perform in the 2024 election. The Republican Party performed badly in the 2022 midterms, and I think most Republicans are acutely aware of this. It wasn’t just Trump-endorsed candidates who lost, Republicans, performed poorly in general. They presented weak candidates in some important races, and Trump warned his base about this. He understands something that Libertarians don’t, how to speak to voters about what they want — now what we think they should want.

Trump certainly has his die-hards that will follow him wherever he goes, but many Trump supporters don’t like him personally, they like that he does what he says. Dumping Trump could backfire, and when it does, the Libertarian Party could and should be ready to capitalize on this.

Please hear me out. Most Libertarians detest Donald Trump, and many find his supporters even more appalling. They think anyone that supports Trump is a mindless cult follower or conspiracy theorist and not someone that Libertarians want to join our party, especially not in droves.

But, I think anyone eyeing a serious run for president needs to gain the trust and support of Donald Trump’s base. Tulsi Gabbard gets this. I think she is being opportunistic, but I also think she’s smart. Trump’s hard-core supporters aren’t who we should be targeting. But, we should be thinking about strategic messaging that could get Trump’s people thinking.

Why did they support Trump? They were fed up with the GOP establishment dragging us into foreign conflicts, instead of putting America first. They were sick of Republicans making empty promises with no plans for actually delivering them. They were tired of weak Republicans not standing up for them. The same Republicans who have let our economy fall apart and allowed Biden to get elected are the ones they are tired of. Trump supporters care about our economy, our country, and our liberties.

Trump supporters, Democrats, and independents could be won over with the right messaging. Many of these voters care more about the economy than they do about the culture wars and social issues that are dividing us. It’s important that Libertarians pull themselves out of the emotionalism and polarization that Donald Trump and Never-Trumpers have created, and start talking sense to people.

Donald Trump’s supporters aren’t our enemy. If Libertarians can draw in the people who liked Trump because he was an outlier to the same-old-same Republican Party while being clear on what our principles are, we could win over some of the swing voters who supported Trump, while also pulling in Democrats who are tired of the never-Trumpers who gave us Biden.

Libertarians, it’s time to get serious! We can disagree respectfully and still be focused on moving the party forward. Instead of throwing a tantrum every time we don’t have our way, let’s start being more strategic with how we grow the party. We don’t have to sing kumbaya and get along, but we do need to plan, organize and market much more effectively.

Do we want to continue being a small political party? Bringing voters into the fold the way we have been doing it hasn’t worked. We can’t grow our party and simultaneously be obsessed with keeping it the same. We need new life, new energy, and a broader base. To do this, we need to be prepared for an influx of people who aren’t big-L Libertarians.

We need to attract voters who will vote for us. There are millions of voters that understand we need to balance our budget, stop trying to spend our way into a better economy, and stop focusing on culture wars. We have the best platform of all the political parties We need to plan ahead and capture this opportunity instead of “whiffing the ball” again. We are all Libertarians and we need to start working on a game plan to win over voters now, not 20 years from now.

PrevPreviousJo Jorgensen is the Most Searched for Libertarian Presidential Candidate, Google Trends Show
NextHow to Join the Libertarian Party of New MexicoNext