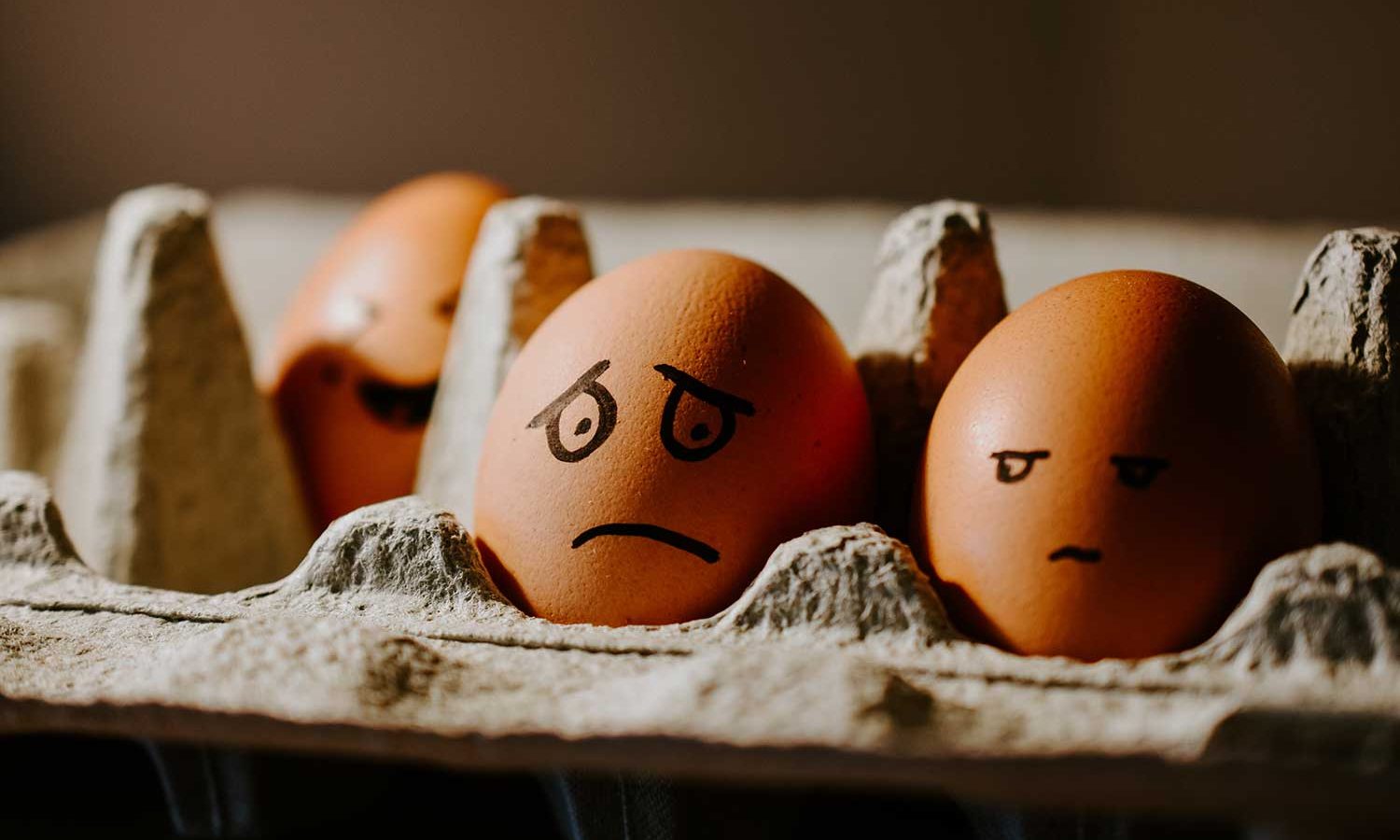 I’ll admit it, I’m an egg-aholic. Every day, I’m shelling out mountains of money on my breakfast habit — and eggs aren’t getting any cheaper. Why on earth are eggs so expensive right now? There has to be an eggsplanation for this! A lot of folks think inflation is what’s making eggs so expensive. But, why have eggs doubled and tripled in price? Inflation isn’t the biggest reason for the dramatic increase in egg prices. So, what is the cause of this mega eggflation?

Which came first…the chicken or the expensive egg? Just as we are recovering from the Covid-19 pandemic, chickens are now experiencing an equally devastating pandemic. A highly contagious avian flu has spread across 46 states in the US and is the largest global bird flu in history.

It looks like it’s the chicken’s turn to battle a deadly pandemic, but this flu could wipe out even more fowl and drive up the cost of poultry, turkeys, and eggs. Gino Lorenzi, assistant professor of poultry science at Penn State University says, ‘This is the largest animal emergency that USDA has ever faced in this country.’ Over 52 million birds have been killed by the deadliest bird flu in US history. This virus spreads quickly and is wiping out ninety to one hundred percent of the birds within a day or two of catching it.

The World Health Organization is tracking this avian flu as there have been reported cases of human infection. Human infection is rare, with only 240 cases worldwide as of January 5, 2023. While infection in humans is extremely rare and most of the reported cases were found in Vietnam and China, the fatality rate from this virus is extremely high with 56 percent of the cases being fatal.

However, some virologists are concerned that this virus could be “tweaked” to infect humans. Ilaria Capua, an Italian virologist and expert on avian flu told Vox, “We don’t know if an H5 virus will ever ignite a pandemic [in humans], but if it does, it’s not going to be like Covid — it’s likely going to be worse, like much worse.”

Reason #2 Egg Consumption is at a Record High

There is not just a supply issue in the eggflation equation. There is a demand issue — people are eating more eggs than ever. In 2018, the country consumed more eggs than it had in nearly fifty years. People were told for decades that eggs were bad for you. Eating eggs regularly would lead to high cholesterol, heart disease, and strokes. But, the US changed its dietary guidelines in 2016, dropping its restrictions on cholesterol intake and recommending eggs as part of a healthy diet.

In recent years, eggs have become an increasingly popular breakfast food in the United States as more people adopt high-fat, low-carb diets such as the ketogenic diet. The keto diet has quickly become one of the most popular diets in the US, with over 5% of Americans now following it. As a result, eggs have skyrocketed as an essential breakfast for many people. This is one reason why people are eating and buying more eggs.

During the unprecedented times of the pandemic, when people were stuck in their homes with nothing to do, they sought out comfort from their kitchens. According to a Wall Street Journal article, Americans set records on Google Trends during the pandemic as searching for recipes became our new pastime.

What were we searching for? Comfort foods! And eggs, are one of the most comforting foods for many of us. Eggs are an American tradition and one of the foods we crave most for solace. With inflation hitting everyone hard right now, there is, unfortunately, no comfort coming from the price of eggs.

We can’t leave out good old-fashioned inflation. While inflation isn’t the biggest factor for why eggs are so expensive right now, it is a factor. The price of food in general is up, way up! We saw an 8 percent increase in the overall cost of food in 2022 and that figure rises to 13.5% when looking at what we eat at home. This is the highest food inflation we’ve seen since 1979!

Some farmers claim that eggflation is nothing more than greedflation. They accuse the United States’ largest egg producers of using the avian flu as a cover for price gouging. Like others blaming corporate greed on skyrocketing inflation, they say large corporations are manipulating consumers and making record profits. According to a recent article published in Time magazine, America’s largest egg producer saw a 600 percent increase in profits in the last quarter of 2022.

Farm Action, a farmer-led non-profit advocacy organization, recently accused Cal-Maine Foods of using “cartelistic conspiracies” and intentionally reducing their production of eggs so that they could make higher profits. Their quarterly report showed no positive avian flu tests on any of the farms they own. Farm Action sent a letter to the FTC with their concerns. Their letter states the actual impact of the avian flu on egg production was minimal and any losses were far outweighed by record-high lay rates among their remaining hens.

Why isn’t the price of poultry skyrocketing too?

There is no question that the bird flu is affecting the avian population, but why are the prices of poultry not escalating at the same rate as chicken? The answer could be two-fold. One, leading producers of eggs may be inflating their prices. But, the bigger reason, according to associate professor and agricultural economist at Iowa State University, Lee Schulz, is that eggs have an “inelastic demand”, meaning that people who love them will continue buying regardless of their price tag.

There are no alternatives for eggs, so people who love eggs (like me) will continue to buy them no matter how much they cost. Additionally, eggs are needed for baked goods and other food items, so even if everyone gives up eggs for breakfast, there will still be a high demand for eggs and egg products. Chickens and turkeys, on the other hand, can be replaced with other meat products, which is one reason the price of poultry hasn’t been as affected.

What can consumers do to deal with the expensive price of eggs?

The price of eggs will eventually come down. In the meantime, you can get creative with how you consume eggs. Try using fewer eggs or buying eggs from organic producers. Organic and free-range egg farms have not been as affected by the avian flu. Or let Cal-Main Foods know how you feel about their profiteering by shopping for eggs from other brands. Cal-Main Foods is the largest producer of eggs. Their brands are sold in 28 states and include Eggland Best, Cal-Maine, Rio Grande, and Sunups.