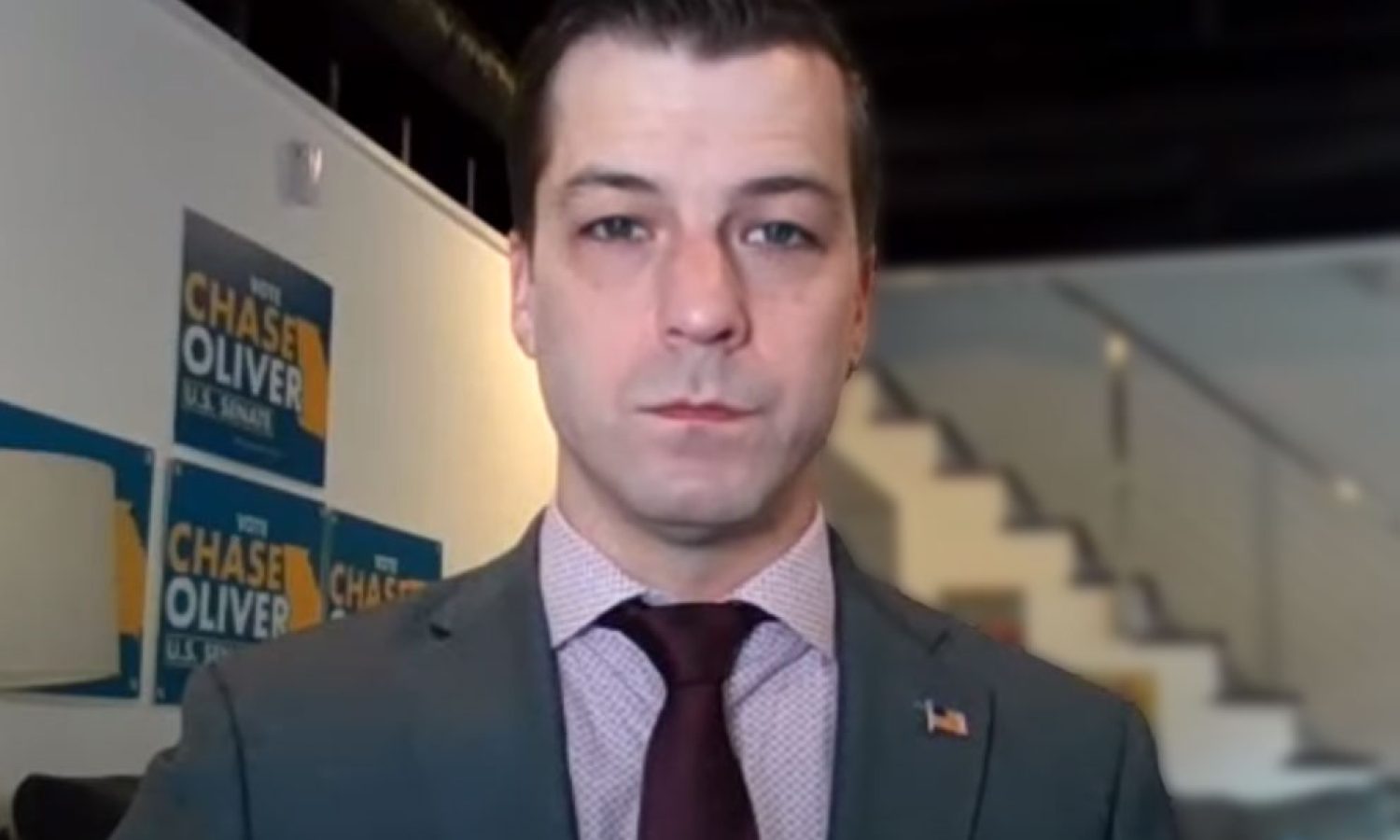 The Libertarian who Rolling Stone has called “the most influential Libertarian in the US right now” is considering a presidential run. Chase Oliver made national news last month after causing a run-off in Georgia’s senate race against incumbent Raphael Warnock and former football player Herschel Walker.  On Friday, Chase announced that he was considering a presidential run.

At a time when the Libertarian Party has been inundated with negative publicity, Chase Oliver is a breath of fresh air. His vision, energy, and charisma are winning people over both inside and outside the party.

The popular Libertarian tweeted to his followers in a pinned tweet, “So I am announcing today that I am exploring the 2024 Libertarian nomination for President. Join me on the campaign at http://votechaseoliver.com and watch my announcement here.”

So I am announcing today that I am exploring the 2024 Libertarian nomination for President. Join me on the campaign at https://t.co/TepfU8Mj8h and watch my announcement herehttps://t.co/5AKFk3uKqB

In a video announcement he released on Friday, he said “Not just Georgians, but all Americans deserve to be represented and politicians in both the other parties too often choose to ignore them instead. And why is this? Because the two-party system has made coalition building and cooperation a dirty word in American politics.”

The Libertarian candidate in Georgia’s Senate race earned a lot of attention from voters and from the press. Libertarians are ecstatic about his results, but other political parties have called him a spoiler. When he was asked how he feels about this criticism, he told Reason: “You can’t spoil what’s already rotten.

Oliver garnered 2 percent of the vote in Georgia. Over 81,000 Georgians voted for the Libertarian candidate who ran a small-budget grassroots campaign. Unlike other presidential hopefuls, Oliver is not talking about partisan ideology, the culture war, or simply trying to spread the message of liberty, he is speaking to the heart of Americans on issues that matter.

With a pool of candidates like Trump, Biden, and Desantis, Oliver rises above the fray, with a message and a style that resonates with people. He discusses what voters are looking for — someone who understands what Americans are struggling with right now. He is a candidate that gets it!  Americans aren’t looking for more of the same or lip service, they want a candidate that understands the real-life issues they are facing.

He says that “America needs a choice who understands both the realities of modern life and the challenges faced by a new generation who is both Dynamic enough to adapt to new conditions and energetic enough to bring Innovative change to Old institutions.”

How does Chase Oliver Compare to the Other Libertarian Hopefuls?

The Libertarian presidential race is on!  And, it looks like it might be one of the most competitive and exciting races in the party’s history. Stacked against potentials like former congressman Justin Amash and comedian Dave Smith, Chase OIiver stands out.

His pro-choice stance contrasts with other Libertarians considering a 2024 presidential run. He says he is pro-choice on everything. “If I were in the United States Senate, I would be supporting the codification of Roe and Casey to make it federal law, he told Fox 5 Atlanta. “I believe in bodily autonomy, and ultimately I don’t believe it is my decision or the government’s decision how to tell women what to do with their body.”

He campaigned on a platform that included:

Would you like to see Chase Oliver as the Libertarian Presidential Nominee in 2024?

The Libertarian Party will hold its convention in 2024 where it will select the party’s nominee for president and vice president.  Chase Oliver could be competing against several other Libertarian hopefuls.  Do you think he would make a good choice for the Libertarian Party’s presidential candidate?

The 2024 Libertarian presidential race is shaping up to be an exciting one. I am a fan of Justin Amash and a long-time supporter, but Chase Oliver has proven to be an excellent alternative. His ability to connect with the average voter makes him not just an awesome libertarian, but someone with real potential to win votes for the party.

Chase Oliver could breathe new life into the disheartened Libertarian Party. I’d love to hear what you think about Chase Oliver’s announcement

4 thoughts on “Chase Oliver, the Libertarian Who Forced A Run-Off in Georgia, Is Considering Presidential Run”